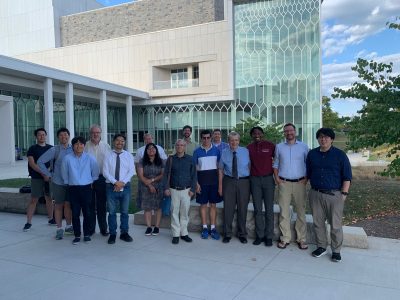 Myounghoon Jeon, Ph.D
From Kitchen to Aquarium: The Spectrum of Sonification across Information, Expression, Immersion

"Traces" is an interactive work for the Locus glove-based interaction system designed specifically for the Cube to study the limits of human spatial aural perception capacity as part of National Science Foundation-sponsored research, the Spatial Audio Data Immersive Experience (SADIE), as well as the expressive potential of spatial sound as the primary dimension for driving the musical structure. "Traces" is in part inspired by SADIE’s study of the sun’s influence on Earth’s atmospheric data.

"The Cascades" presents tetrahedral field recordings of water sounds at various locations along the trail of the Cascades in the Jefferson National Forest. The original quadraphonic recordings are staged to induce various kinds of spatial perception, using unique spatial configurations afforded by the 3D speaker array in the Cube. The multi-story High Density Loudspeaker Array (HDLA) of the Cube is leveraged to manipulate elevation cues. The 64-channel ring of the first catwalk is employed to localize sound without the use of phantom images, allowing for unusual clarity of the spatial image in some passages.

"Bunga Bunga" is designed for live encoding and decoding with high order ambisonics (HOA). Up to 128 tracks from the audio workstation Reaper transmit individual audio channels and control data for each source in 3-D space into a sound spatialization engine in Max/MSP. Typically, I use ambisonic equivalent panning (AEP) to pan individual sound sources in a virtual 3-D volume, which can scale to other 3-D sound arrays. In the Cube, I use at least 13th order ambisonics with a modifiable center zone size. This method paired with the 3-D convolution reverb process I designed simulates real room acoustics in real-time at a low computational cost. For this reproduction of Bunga Bunga, I captured a live performance in 7th order ambisonics using SN3D normalization format with ACN component ordering.

"Crowd in C" utilizes a distributed musical instrument implemented entirely on a web browser for an audience to easily participate in music making with their smartphones. This web-based instrument is designed to encourage the audience to play music together and to interact with other audience members. Each participant composes a short musical tune that will be a musical profile of themselves. The use of the musical profile is a metaphor for online dating websites and the network created by the instrument mimics such social interactions where a user writes a personal profile, scans other profiles, likes someone, and mingle with other online users. A live coder can actively progress the music and orchestrate the crowd by changing the instrument on the fly.

Caroline Flynn (Poster)
Pulling at the Heartstrings : Development of a Cellular Stethoscope